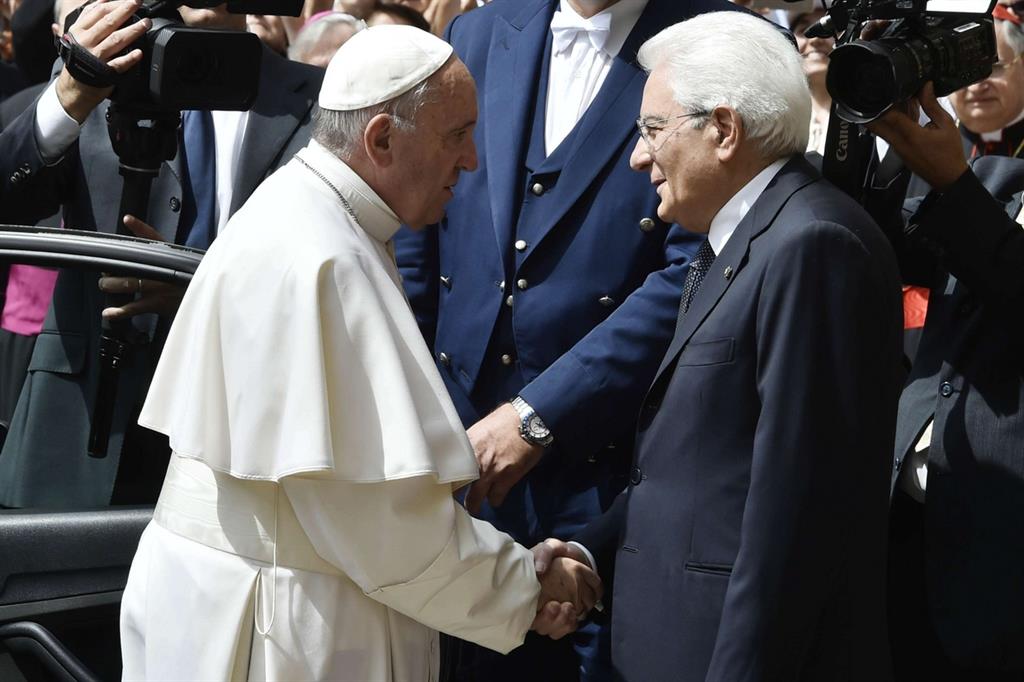 The ongoing health emergency proposes many questions for ecclesiastical law[1].  First of all, the limitation of numerous fundamental rights ordered by the Government Decrees dated 8th, 9th, 11th and 22th March 2020[2], as well as by the Law Decree 25th March 2020, n. 19, represented a balance test between the fundamental rights[3], with particular regard to the relationship between the right to health (art. 32) and the right to religious freedom (art. 19). Moreover, government measures, affecting the organization of religious rites and ceremonies, reverberate on the principles of autonomy and confessional freedom, expressly guaranteed by articles 7 and 8 Const. for the Catholic Church and for all other religions.

On this point, it should first be noted that, lastly, art. 1, lett. h) of the Law Decree dated 25th March 2020, n. 19, in providing for the possibility of imposing limitations on the only “entry”[4] into places of worship, has modified the provision of art. 1, lett. i) of the Government Decree dated 8th March 2020, which, otherwise, imposed limitations on the “opening” of places of worship[5]. The use of the word “opening” was really misleading and, not by chance, it induced the Cardinal Vicar of the Diocese of Rome, on 12th March 2020, to issue a decree – modified the following day – ordering the “closure” of the parochial and non-parochial churches of the Diocese of Rome, and more generally of the worship buildings of any kind open to the public.

The Decrees emanated for the containment of the contagion constitute a «unicum»[6]  from the second post-war period to the present and reflect on the collective dimension of the exercise of the right to religious freedom, in some way similar to the interventions adopted, for reasons of public safety protection, after the terrorist attacks of 2001[7].

The incisiveness and the unilaterality of government measures to suspend all religious ceremonies, including funeral ceremonies, raises a question about the potential damage to confessional autonomy guaranteed by the Constitution and reaffirmed in bilaterally contracted rules. Perhaps it would have been appropriate to ensure, despite the emergency, some form of prior dialogue with the confessional authorities[8], even if the potential conflicts seem to be absorbed by the enhancement of the principle of loyal and mutual collaboration between the State and the Church, explicitly referred to in the Concordat in force since 1984 with the Catholic Church.

From this point of view the management of this health emergency represents an interesting – and we hope unrepeatable – testing bench of the good stability of the principle of collaboration between State and religions.

It will be interesting to examine how religious confessions will behave in the period immediately following the expiry of the term fixed for the suspension of religious rites, especially considering that the eventual resumption of ceremonies is currently set for Saturday 4th April 2020, the eve of Holy Week, traditionally considered central to the massive popular participation.

At the moment it is already known that rites officiated by the Holy Father will take place “behind closed doors” and, in any case, according to organizational methods suitable for guaranteeing the prevention of contagion risks.

The diocesan decrees with which the bishops have hitherto dispensed, in accordance with can. 1245 C.i.c., the faithful from the obligation of observance of the precept related to the celebration of feast days[9]  included in the period 9th  March 2020 – 3rd  April 2020 will have to take into some account the non-participation in the Holy Easter Mass of Resurrection, since the Catechism of the Catholic Church obliges the faithful to receive the Eucharist at least once a year, possibly during the Easter period (n. 1389)  and can 1246 – § 1 C.i.c. states that  «Sunday, on which by apostolic tradition the paschal mystery is celebrated, must be observed in the universal Church as the primordial holy day of obligation». And these choices must be taken by the Bishops, the only ones who have legislative power in liturgical matters, even if the Congregation for Divine Worship and the Discipline of the Sacraments, on 19th March 2020, with a special Decree on Holy Easter has already dictated indications to allow the celebration of the rites of the Easter Triduum without the presence of the faithful[10]. Furthermore, due to the persistence of the pandemic threat, the Congregation for Divine Worship and the Discipline of the Sacraments, with a Decree dated 25th March 2020,  detailed the indications contained in the Decree on Holy Easter, prescribing specific measures for each liturgical moment of the Holy Week[11] and, above all, by inviting the Bishops to advise the faithful of the start time of the celebrations so that they can unite in prayer in their homes, also through live, unregistered electronic means of communication.

In accepting the indications of the Congregation for Divine Worship and the Discipline of the Sacraments, the Italian Episcopal Conference, with its Document Orientamenti per la Settimana Santa dated 25th March 2020, has suggested to the Bishops to defer processions and other rites of popular piety to dates of 14th and 15th September 2020. But above all in these guidelines it is acknowledged that the Italian Episcopal Conference, at the outcome of an interlocution between its General Secretariat and the Presidency of the Council of Ministers, has obtained that the celebration of the rites during the Holy Week, even if deprived of the physical presence of the faithful, may take place at least with the participation of a deacon, of those who serve the altar, as well as a reader, a cantor, an organist and, possibly, two operators for the transmission. In this way, as underlined in the guidelines, a “minimum of dignity” can be assured for these celebrations[12], always respecting the sanitary measures and the interpersonal distance of one meter.

It therefore seems that a satisfactory balance between the protection of public health and the exercise of worship in a central moment – such as Holy Week – has been found, thanks to the dialogue with the Presidency of the Council of Ministers.

Moreover, the ongoing pandemic confirmed the increasingly decisive role assumed by religious bodies in substitution for the dismantled system of welfare state[13].

The dynamism of religious bodies, also in relation to the management of the health emergency, has manifested itself through collaboration with civil authorities in a context of horizontal subsidiarity.

It’s emblematic the case of the construction of a field hospital by the non-governmental Christian-Evangelical organization Samaritarian’s Purse, based in the USA, to support the deficiencies of the Cremona hospital[14].

To consent to the initiative, coordinated by the senator of evangelical faith Lucio Malan, it has been necessary to provide urgently by inserting a special article into the Law Decree n. 18 (so called “Cura Italia”), dated 17th March 2020, that, by way of derogation of the general rules (artt. 49 and 50 of the Presidential Decree 394/1999), has allowed, for the entire duration of the epidemiological emergency from COVID-19, the temporary exercise of health professions by qualified foreign personnel.

Equally remarkable was the choice of the Italian Buddhist Union (UBI) to allocate part of the resources received with the “Otto per Mille”, for a total of 3 million euros, in equal shares to the Civil Protection for the immediate management of the emergency and to a special fund for Third Sector organizations engaged in the necessary support work, including economic, for the most fragile people[15].  With a view to horizontal subsidiarity[16] and on the basis of the emergencies that will be reported, UBI will cooperate with the various organizations of the Third Sector identified from time to time to prepare the necessary aid interventions, in view of the significant economic repercussions that will presumably be recorded even after the pandemic emergency has been overcome.

The Italian Episcopal Conference itself, in the wake of the example of Pope Francis[17], has allocated 10 million euros to the 220 diocesan Caritas scattered throughout the country and half a million euros to the Foundation Banco Alimentare Onlus to guarantee support for families who are in situations of inconvenience, providing for the purchase of basic necessities and the maintenance of takeaway canteens and protected dormitories.

Lastly, the Valdensian Table, on 19th March 2020, has decided to allocate 8 million euros, drawn from “Otto per Mille”, for the establishment of a special fund for emergency management, in synergy with institutional entities and third sector organizations.

Eventually, allow me one last tough.

The epidemic from Covid-19 will also be remembered for having brought about a clear acceleration, if not a real turning point, regarding the use of digital tools for the celebration of religious rites[18].

Massive use of Whatsapp groups and Live Facebook has been made.

Certainly, the tool of Live Facebook has taken on a great use to allow the participation of the faithful in religious rites. Furthermore, this tool is perfectly in line with the indications of the Congregation for Divine Worship and the Discipline of the Sacraments of 25th March 2020 –  confirmed by the guidelines of the Italian Episcopal Conference – which suggested the involvement of the faithful in the celebration of the rituals through the use of live electronic means of communication.

However, as is known, it should be emphasized that the full usability of all content published on Facebook is guaranteed only to members of the social network. And this unlike the Youtube platform – which has also been frequently used to allow remote participation of the faithful in religious rites – that, on the contrary, is freely accessible by every user without the need for prior registration. This finding seems to demonstrate the effective existence of the risks recently underlined in the doctrine: namely that the concrete possibility of exercising the right to religious freedom in the cybernetic space may be anchored not to the regulation of public, supranational or at least national law, but to a power private, that of the owners and managers of digital platforms and social networks[19].

* Ph. Doctor in Ecclesiastical Law at the University of Naples “Federico II”.

[2] The adoption of government decrees is based on powers established by the Government legislative Decree dated 23th February 2020, n. 6, containing Urgent measures for the containment and management of the epidemiological emergency from COVID-19“.

[4] The literal tenor of art. 3 of Law Decree dated 25th March 2020, n. 19 also seems to allow mayors and governors of the regions to adopt further restrictive measures for entry to religious buildings.

[10] See the Decree on the Holy Easter by the Congregation for Divine Worship and the discipline of the Sacraments dated 19th March 2020 (the decree can be consulted here).

[11] The Decree, in addition to providing specific changes to the rites of Palm Sunday, Chrism Mass, Holy Thursday, Good Friday and Easter Vigil, establishes that Bishops and Presbyters could avoid concelebration and celebrate Holy Week rites without the presence of faithful.

[12]  The guidelines of Italian Episcopal Conference dated 25th 2020 can be consulted at the web pages of Italian dioceses, e.g. the Archidioecesis of Naples.